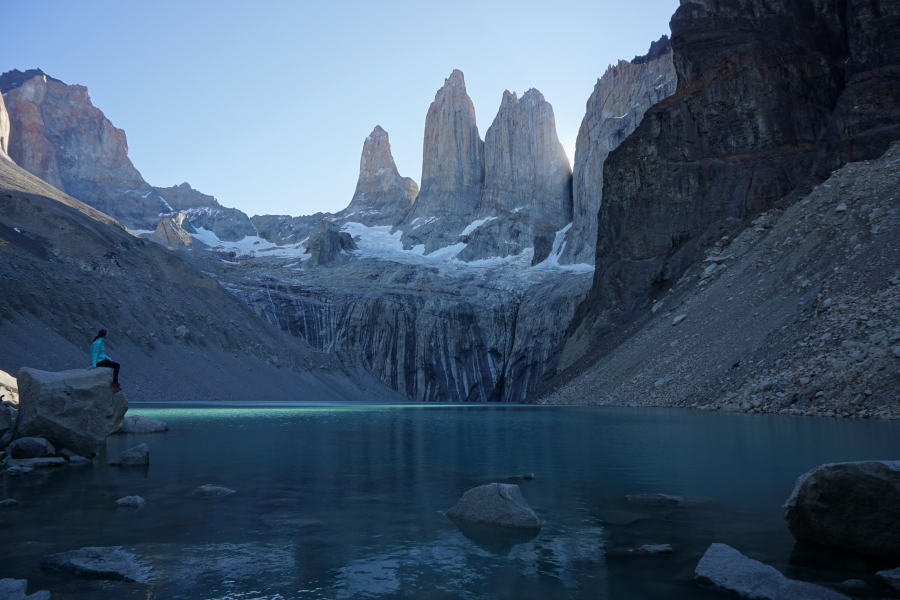 5 days, 4 nights, something around 70 kilometers… I still can’t seem to find anywhere with a definitive sum of distances that you hike along the “W” Trek within Torres del Paine National Park. You learn to guess-timate how far 6 hours of hiking equivalates to, as that’s how distances are “measured” in the park. They do have signs with some ambiguous distances listed, but at the end of the day it really seems to be a rough estimate. Anyway, the entire backpacking trip was beyond incredible. There were some bumps in the road, and by bumps I mean a broken bridge that gave Kendra and I a run for our money, but nothing we couldn’t handle!

It is recommended to stay in Puerto Natales the day before starting your treks in the national park, so that is what we did. We stayed in a quaint, quiet hostel called the Yagan House, where we could relax and organize all of things we wanted to bring in our packs. Since backpacking wasn’t the only thing we would be doing during the entirety of our trip, we had a few extra articles of clothing that we were able to store with the hostel while we were away. We also rented a tent and some cookware here as well. While initially planning for the trip, we had decided it was worth renting as we didn’t want to lug around too much unnecessary gear after the trek was through.

Kendra and I had originally walked to our hostel from the bus station, but we opted to treat ourselves to a cab ride the morning of our departure. I had been advised by an REI employee during a chat about the trek, that the buses can be a little crazy on the way to Torres del Paine. He was not lying. Thank God we had purchased bus tickets well in advance. There were so many backpackers waiting, hoping to get a seat. We were at the bus station 15 minutes early, and barely got our bags under the bus and ourselves into our seats before the vehicle took off on the two hour journey to the park. Upon arriving, we had to pay the entrance fee and sit through an information session, which can be paid by credit card FYI. It was about 30$ USD. The visitors center is still several miles from where you begin the trek, so we caught another shuttle from the center to the trailhead area.

There is quite a bit of debate as to whether you should hike the trail East to West or West to East. Kendra and I decided on East to West and I am so glad that we did. Enter: Broken Bridge. The bridge was supposedly down between Campamento Italiano and Paine Grande. We would be getting to its location on Day 4 of our trip. This damn bridge became the forefront topic of all conversations had along the trails. Would it be fixed by the time we got to it? Would there be a boat shuttling people over? Could we just cross it, as heard it wasn’t that bad? Could we cross the river somewhere else? How were other hikers dealing with it? Well, other hikers getting royally screwed. That’s the answer to that. Camping reservations were getting all messed up as people were having to turn around and go backwards, hiking many more kilometers per day than they should have been. People were having to shell out even more cash for the main catamaran that transports hikers to Paine Grande. There was a shuttle boat for maybe one day but winds were far too strong to not have stable transportation after that. We heard nightmares of people hiking for hours and hours extra just to be turned away from campsites that were deemed too full. It seemed that the people hiking the circuit West to East were the ones having the most difficulties in this aspect.

The first day of the trek consisted of roughly 9 kilometers of challenging inclines. Right out of the gate, the trail climbed quite quickly until it reached a valley of which it ran along side.  The sun was beating down on us, and our packs seemed heavier with every step. But honestly in retrospect, I wouldn’t have had it any other way. The rest of the trek seemed so much easier, even the extra long days. 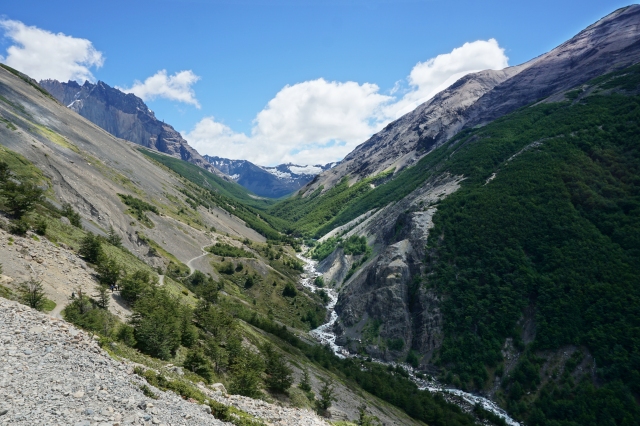 The trail descended through the valley, following Rio Ascencio. The trail flattens out near the end of the valley as you reach Refugio Chileno. Kendra and I had opted to camp for free at Campamento Torres, which was still a steep hike up the next mountain.  If you have the extra funds, I would say to stay at Chileno. That way you can just take a day pack up and leave the heavy stuff down below. 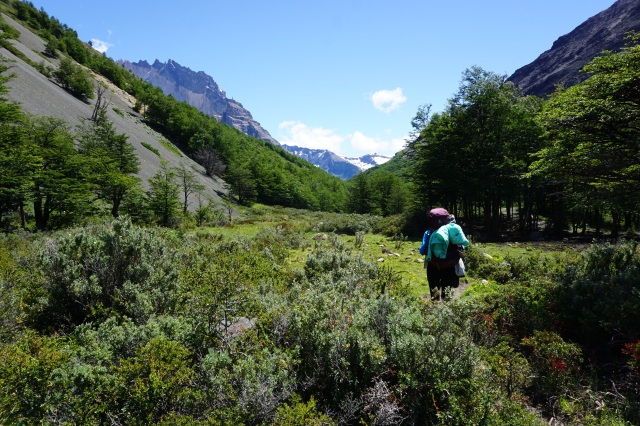 The remainder of the trail crawled up through a forest of tall, thin, twisted trees. I was hot, tired, and wondering if we would ever reach our destination. Everyone who was coming back down the trail, kept telling us, “It’s only 15 more minutes.” For the record, it’s NEVER just 15 more minutes, it’s FOREVERRRR. Ha! But honestly, when I finally saw the semi-hidden entrance to Campamento Torres, I was ecstatic. Our plan was to set up our tent, rest for a short while, and then complete the hike up to the Mirador Torres. Patagonia is notorious for strong winds that snap tent poles, and we were a little worried about our rental tent whose poles were showing their wear. Thankfully, the Torres campsite was well protected, tucked away securely below the trees. We set up our tent and I changed my shoes before starting the ascent to the base of Las Torres. As a tip, I would really recommend having an alternate pair of shoes. Mine were just a lightweight pair of trail runners, but they saved my feet. 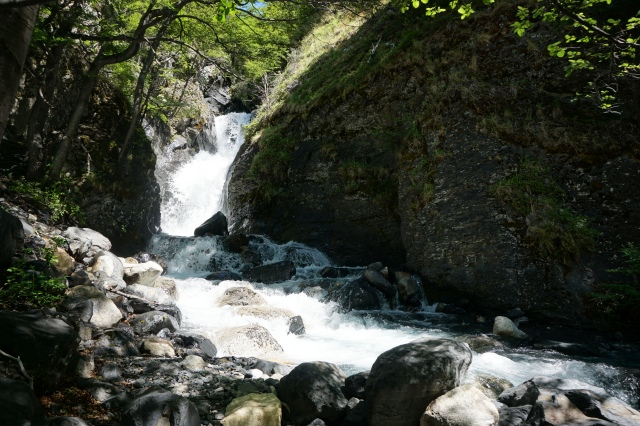 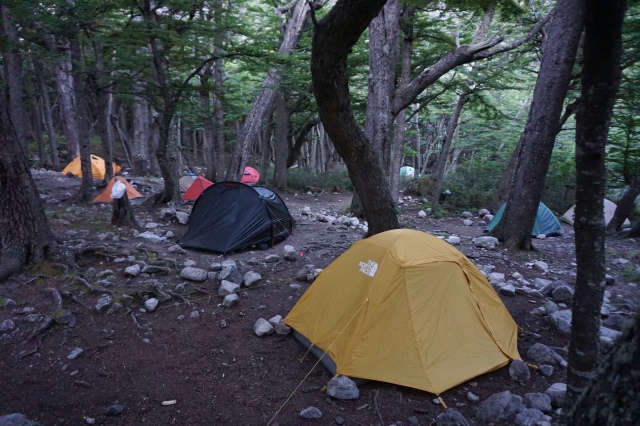 Kendra hiked ahead as I took my time climbing up the rocky trail, absorbing the vast scenery. There were also segments of scree which made the trail tough on my knees. When I took the final turn on the trail, the view opened up onto the beautiful towers and lake. And right as I started walking towards the water, a grey fox popped out from behind a large rock. We had a few moments of eye contact before she scrambled atop a small boulder, sniffing around for tidbits of food. She didn’t seem bothered by me at all, as I stood there snapping picture after picture of her. I actually ran into this beautiful creature several times while meandering around the crumbling granite walls bordering the Torres lake. The place was nearly empty, as we had gotten there later in the evening, avoiding most of the daytime rush. The sun had begun to set on the other side of the towers, creating a beautiful beam of light that shown onto the emerald lake below.  The whole scene was breathtaking and I couldn’t help but sit there in awe of the granduer surrounding me. After we had soaked in enough of the views, and the temperature began to drop, we climbed back down the mountain, cooked dinner, and hit the hay.