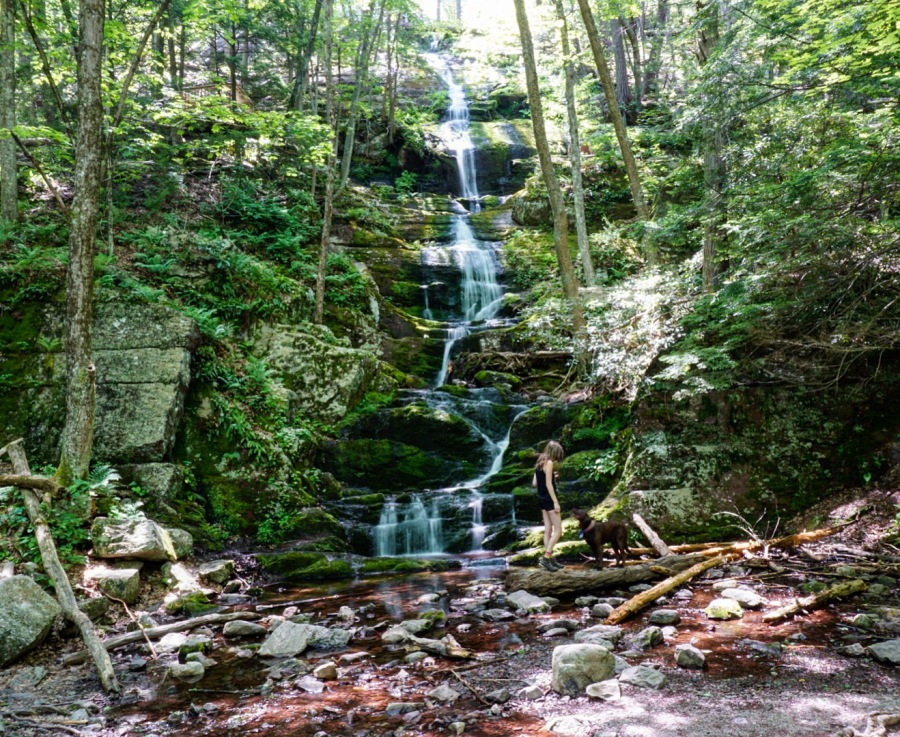 John-Hilton had previously worked with a solar company in the state of Maryland. He lived there for about a year, before taking his dreams to the road. His year spent in Maryland enabled him to save up to pursue his van life passion, and also gifted him with several great friends. I was fortunate enough to be able to meet a couple of these fellows during the course of our journey.

After leaving Assateague Island, we headed to the Eastern Shore of Maryland. One of John-Hilton’s solar buddies, Jimmy, was staying in the area at his girlfriend, Brittany’s, and invited us to come by. They were throwing a big Memorial Day party, complete with any crab snack you could think of, steamed crabs, crab pizzas, crab dips, crab tater tots, it was delicious! We took Bella out on a paddleboard, played corn hole, some good ole fashioned beer pong, and chatted with all the new people we were getting to meet. Everyone was so friendly, and Brittany’s family was incredibly welcoming and generous. Bella even found herself a friend who did not stop following her around from the second we got there to the second we left. It was pure puppy love. We stayed the evening there so that we could get an early start on our drive upwards through Delaware. 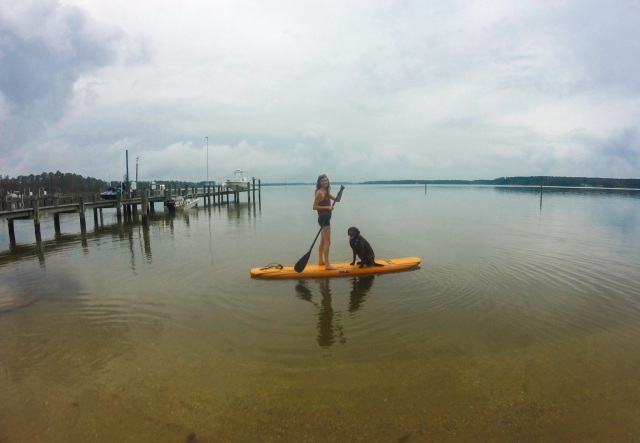 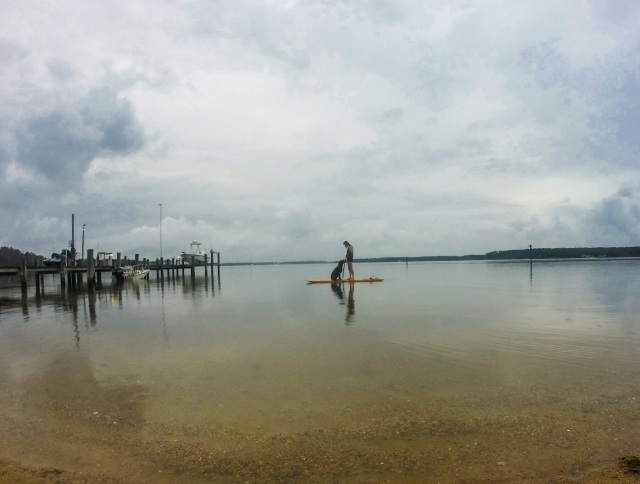 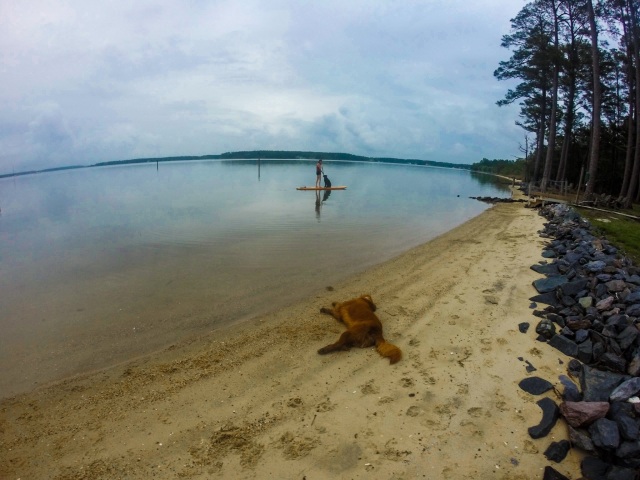 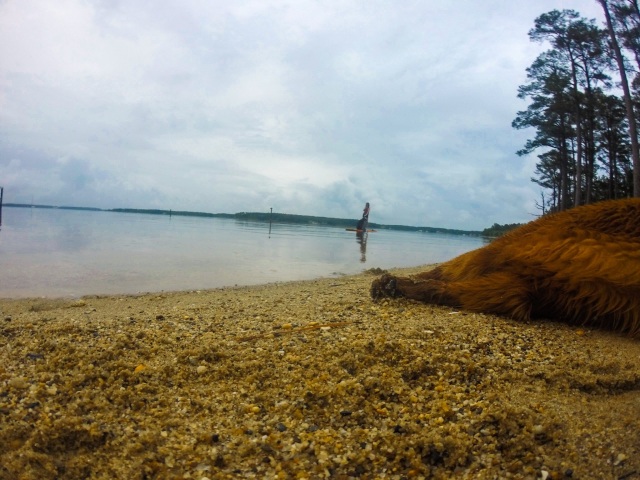 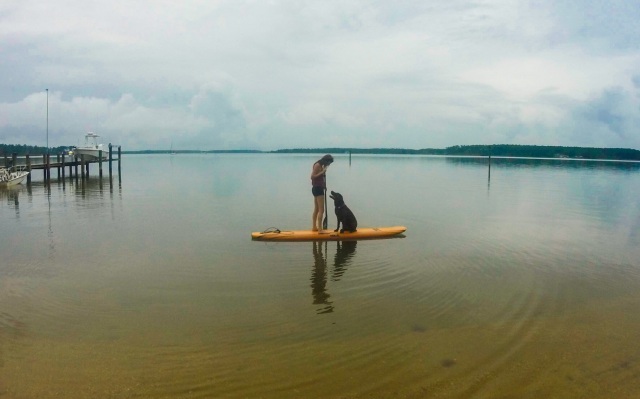 It only took us a few hours to drive through the entire state of Delaware. We were getting up into the area of our country where you can drive through multiple states in the same amount of time it takes to get halfway across some of our western and southern states. We were catching a trailing piece of the tropical storm that had hit Florida a couple days earlier, so our drive through Delaware was pretty dreary. We did take some time to drive through Dover and saw the state house located there. That was pretty cool, I mean Delaware was our nation’s first state. 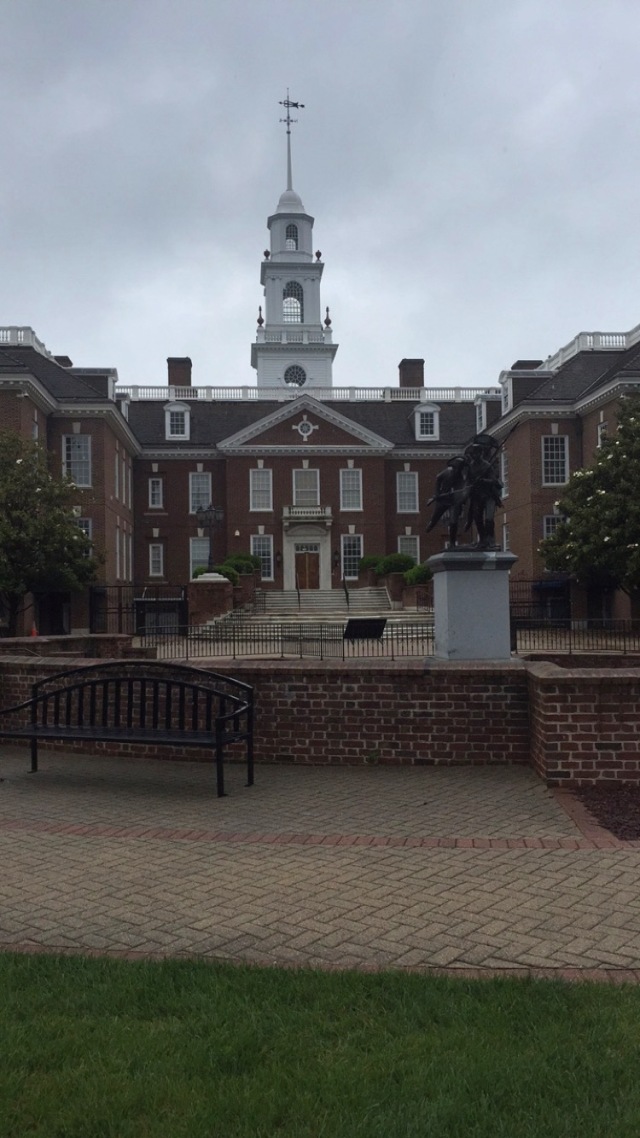 We eventually made it into Philadelphia where we would be staying with our friend, Jessica. I’ve known Jessica and her family for a number of years now, but John-Hilton had grown up with her and her younger brother, Miller, down in Florida. Hilton and I went to college with Miller as well and their family has graciously opened their home to us on numerous occasions throughout the years. It was comforting to see a familiar face so far from home, and we enjoyed a night of dinner, Total Wine shopping, Moscow mules, and movies. In the morning, Jessica had to leave for work so John-Hilton and I packed up the van before heading to check out downtown. Since we had Bella, we were unable to enter into the museums, but we peaked in at the Liberty Bell through the window, walked around Independence Hall, Carpenter’s Hall, and the banks. The sun was beating down on the streets, driving us to seek shady shelters, so we took a stroll through Washington Square and Franklin Square, where we got to see the Chinese Lanterns they had set up as part of the Chinese Lantern Festival. We ended our downtown excursion with a stop at Sonny’s Famous Steaks for a Philly cheesesteak, provolone wit style. This girl doesn’t do cheese whiz. Time had escaped us a bit at this point, causing us to hit the road out of Philadelphia a little later than we had intended. 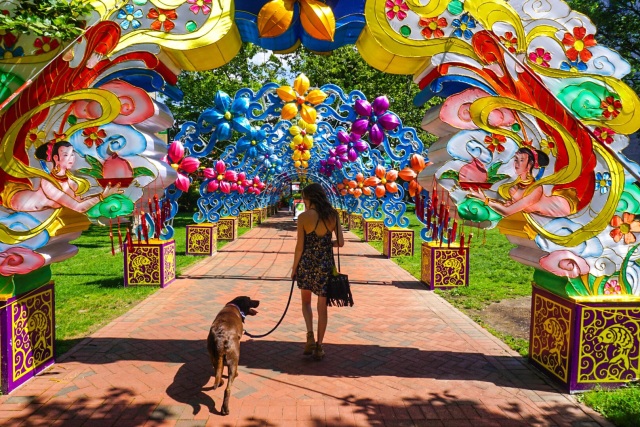 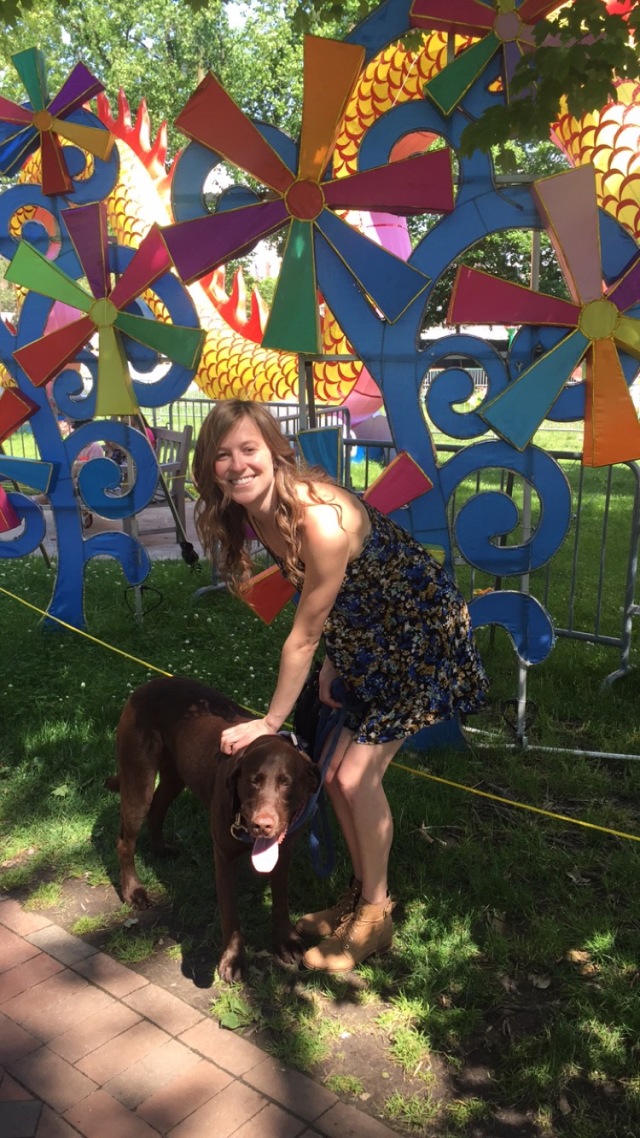 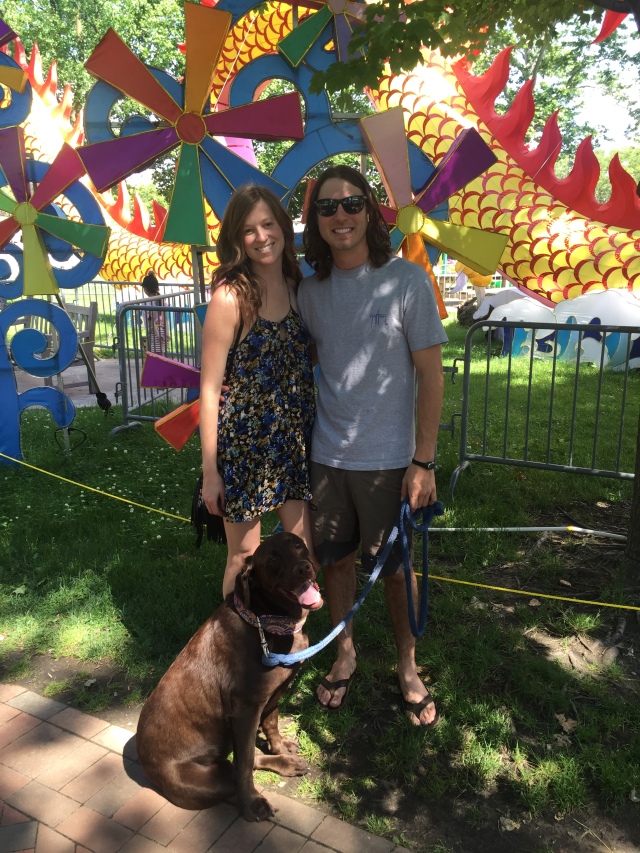 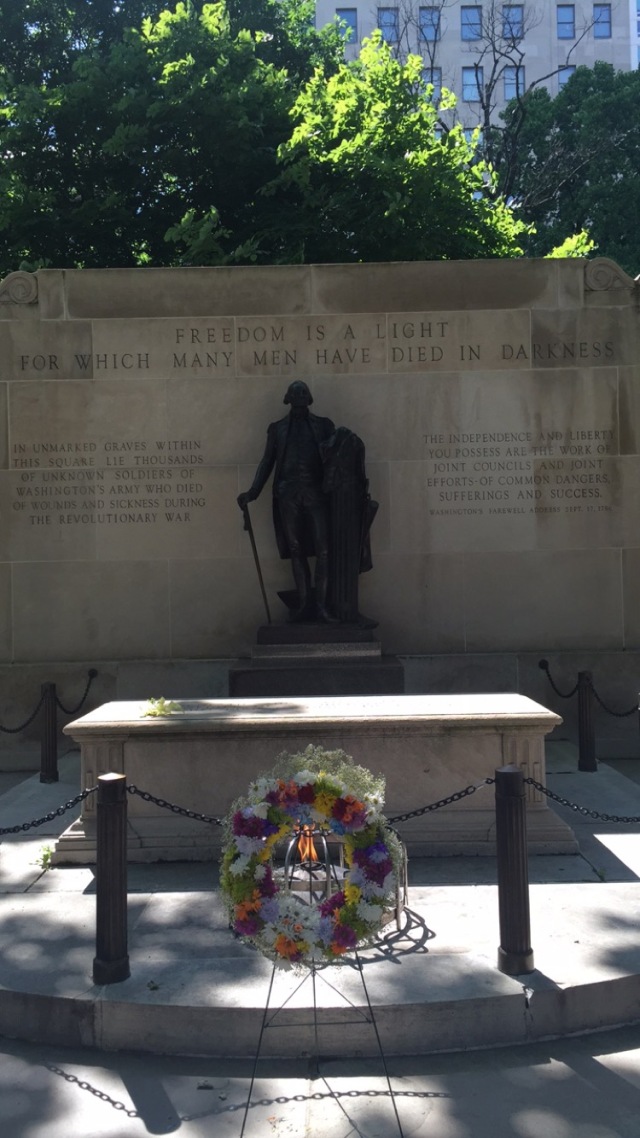 I don’t have too many negative things to say about most of the places we visited during this trip, but I might venture to say that New Jersey was not my favorite. I know it wasn’t John-Hilton’s. It wasn’t that either of us can point to a particular moment or event that made us feel this way, I think it was just the vibes. Traffic was a nightmare, there were police everywhere (which is a little odd to see as it makes you wonder what is going on to need that much law enforcement around), and it was so difficult to find affordable, dog friendly camping. Not a single state forest campground was open to dogs, and we couldn’t get a hold of a dog friendly, family campground after 6 pm. Oh and I guess people in New Jersey don’t know that van life is a thing? I’ll get to that in a minute. So, somehow, John-Hilton found a campground called Mahlon Dickerson Reservation that only cost 15-20$ depending on whether you wanted to camp on the RV side which had electrical outlets at each site and bathrooms, or the primitive tent sites. We were arriving at dark, which is always a nerve racking experience, not to mention there were bear warnings everywhere. After making a loop through both grounds, we opted for the well lit, safer looking RV sites. We also decided it would be nice to have flushing toilets, and the electrical outlets so that we could easily make dinner and breakfast. Did I mention flushing toilets?

The bugs were awful, so thick through the forested trees that it sounded like it was raining. The only time we cracked the van doors was to brush our teeth before jumping into bed. John-Hilton got an X-Files episode going, and we settled in for the night. We awoke to the sun peeking through the green leaves of this very beautiful campsite we had so luckily found. There was a patch of soft, green grass between two trees of which Hilton hung his slack line around. I played fetch with Bella as he practiced his acrobatic skills. All was well. Eventually we got to cooking breakfast, laughing and enjoying the morning, when a large, black SUV started to creep by us. It slowly passed, and John-Hilton and I shrugged our shoulders, not giving the incident much mind until the SUV looped back around and stopped in front of our campsite. Two police officers emerged and walked up to where we were sitting, our grill plugged into the electrical outlet as we chugged along with our cooking. I got up and put Bella in the van, thinking they were going to scold me for not having her leashed, but they started questioning our motives and reasonings for being at the campground. We stated simply that we were on a roadtrip up the East Coast. This didn’t seem to register this as normal as they thought it was weird we were in a van. “Usually only RV’s stay over here,” the officers continued, “why would you stay here in a van?” We stated that we felt safer on this side of the road, that we weren’t very familiar with the town or area and liked the fact that there were other campers on this side of the road. I threw in the fact about electricity and flushing toilets, how in the world is this a weird thing?! The officers proceeded to ask for our information and ran our tags, the whole ordeal lasting about 25 minutes. They came back with our ID’s, made a joke about eating our breakfast, and drove off. It was so bizarre.

After that morning interruption, we were ready to get the heck out of there. The experience made us feel uneasy, not to mention about 20 minutes down the highway we saw a vehicle that had been pulled over by 6 police cars. Again, what is going on in New Jersey?! Just another moment of shrugging and brushing off our shoulders. We were heading to Buttermilk Falls in the Delaware Water Gap for a quick hike before heading to Rhode Island. The falls lie across the street from the parking lot, so we hiked up past them to connect with the Appalachian Trail. It still sounded like it was raining, even though the sun was very high in the cloudless sky. We started feeling things falling on us, and quickly learned that there were thousands of caterpillars falling from the trees. We were picking caterpillar after caterpillar off of us. They were in our hair, our clothing, our backpacks, our shoes, and on Bella! Some would be hanging in the middle of the trail by their threads, dangling precariously in front of our faces, testing out our best ninja moves. Even after we had turned back to the car and picked ourselves free of caterpillars, we found them crawling inside the van. John-Hilton and I decided the caterpillars were competing in a form of insect olympics, and that each caterpillar had to inch its way up to the tallest point of the tree it was on to get the gold. Only a few would make this treacherous climb to the top, as most would find themselves plunging to the leafy ground below or onto an unsuspecting passerby. We wished the caterpillars good luck, and took the first road we found out of New Jersey. 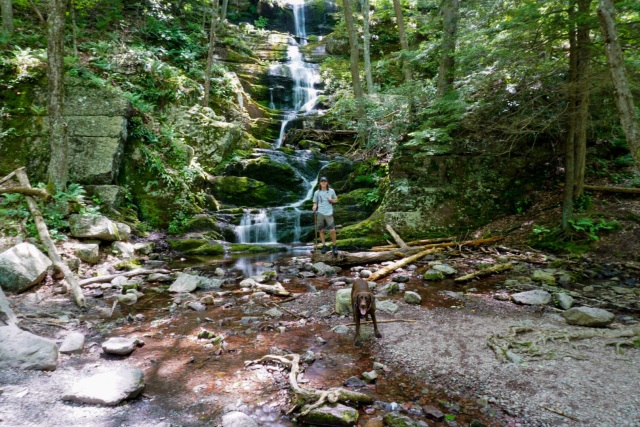 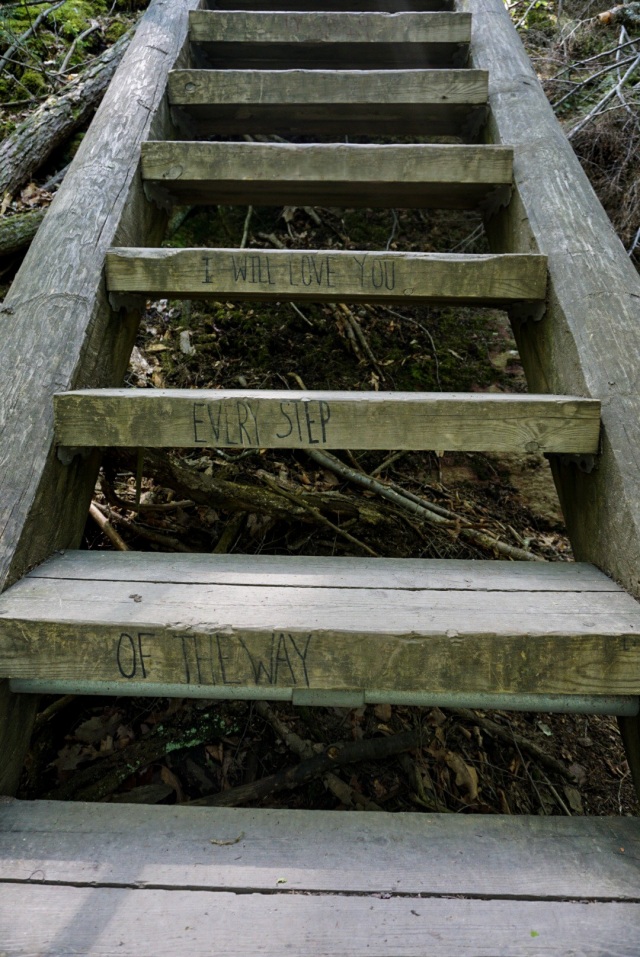 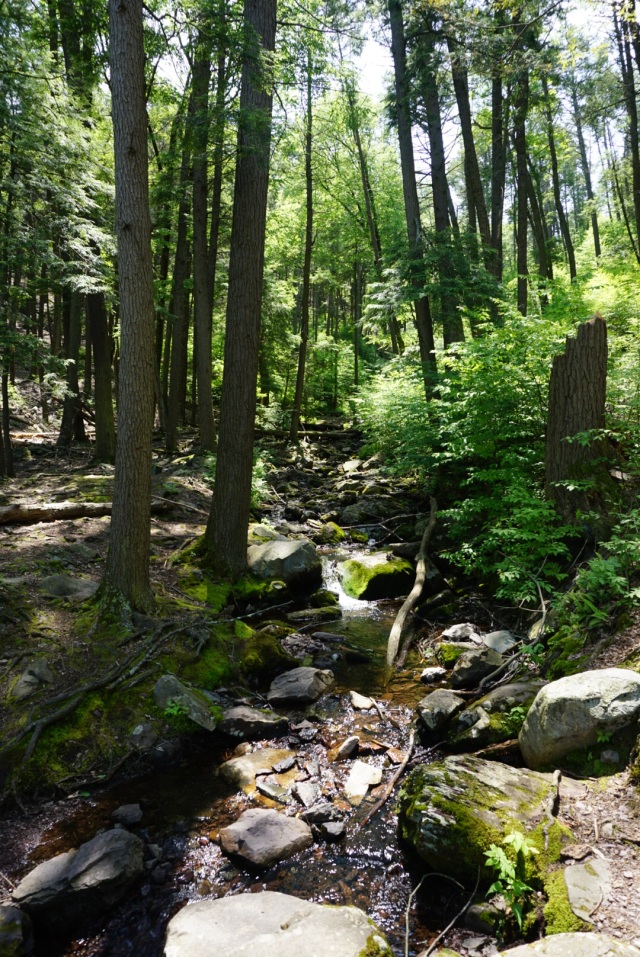