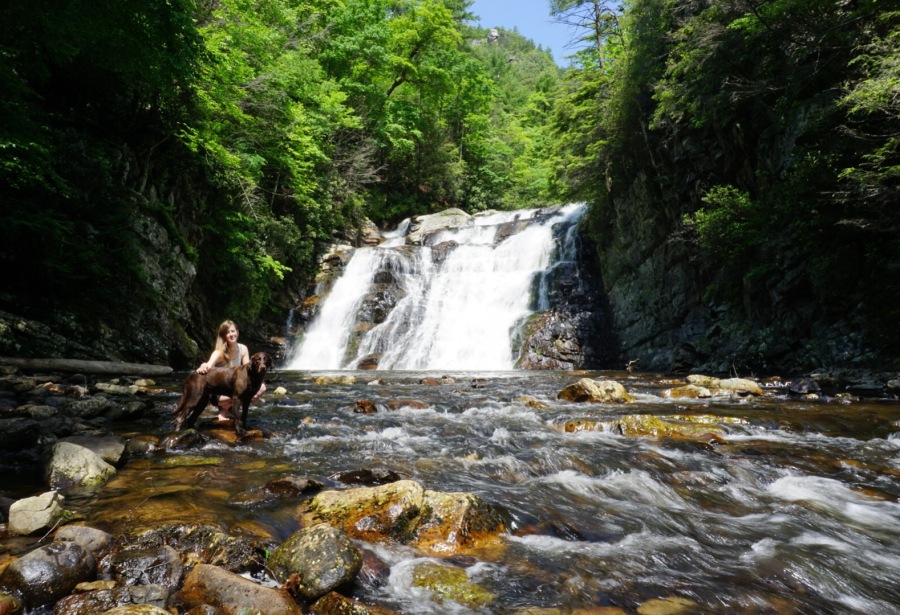 A little bit of excitement, a little bit of nervous energy, a little bit of stress. Those were the feelings going into our frantic day of packing and loading up the van in preparation for our journey up the East Coast. Did we forget anything? Do we really need this? Do we have too much, do we have enough? Thankfully John-Hilton and I had a bit of a deadline to get to Jacksonville or we might have been at it, sorting and rechecking things all night. Besides at some point you have to chalk it up to faith that you’ve got the essentials.

We chose the city of Jacksonville, Florida as the first stop in our journey for several reasons. A. It was relatively close to Tallahassee, where we were departing from; B. I used to live there and my brother, Andrew, still does, so we would get to hang out with him and have a place to stay; and C. a good friend of ours, Lukasz, had just accepted a job in New Orleans and we would get to see him before the big move. Plus, while I had been living in Jacksonville, Lukasz, our other buddy Mitch, and I had perfected a delicious recipe for surf and turf tacos, so I always jump at a chance to recreate these culinary masterpieces. Needless to say, Taco Tuesday and a game night of Mario Kart and pool was the perfect way to start our trip.

The next day was one of those you could describe as comically disastrous. Firstly, I hadn’t had to give Bella flea medicine since being in Colorado, and my parents don’t have fleas at their house, so it wasn’t on my list of priorities. Well, poor Bella picked up some fleas around my brothers house. And by some, I mean she was infested. In just 12 hours she had scratched and clawed open scrapes across her armpits and belly and was downright miserable. I immediately gave her the flea meds, which thankfully is very powerful stuff that would have the fleas gone in a couple hours. So there we were headed north up I-95 with a flea infested pup, dripping with sweat from the excruciatingly hot Florida heat, trying to decide where to stay that upcoming night, feeling just slightly overwhelmed. A couple hours into the drive, we had mellowed out. John-Hilton was jamming out, and I was diligently picking the dead fleas that were falling off of Bella as she lied between our seats. I kept at it for a bit but it was warm and sunny, the perfect environment for drifting off into a light slumber.

I awoke maybe 30 minutes later, looking over to see my happy and content traveling companions still where I had left them, not like they had anywhere to go. I leaned down to pick a dead flea off Bella and *BOOM!!* The van shook, we lurched forward, our belongings went flying forward off of our storage shelving. “What the?!? What was that?!” I exclaimed. “Someone just hit us! That guy there!” yelled Hilton. I was so confused, I could see the bumper hanging in the side mirror, but we were still driving, there were no cars spinning out or cars careening into the ditch. We pulled to the side of the interstate, and watched helplessly as the guy who hit us threw his hand out the window and kept driving. Hilton was shaking, I was infuriated, I could feel the heat of my anger rising through my body. We could have been killed, Bella would have been seriously injured if not killed had she been lying in the back where she had been at the start of the drive. Imagining that 7 gallon water jug flinging down on top of her made me cringe. Not to mention this was my second hit in run within the past 2 months, and third accident (none of which I was at fault for) within the past 4 months. My hit and run in Denver involved a bus driver so she was easy to identify and I was able to get the license plate. It was a lengthy settlement process to get my car fixed, but it worked out. This was a different story. Thankfully for us in this scenario we had each other and a police officer drove by right after it happened. I had to wait 2 hours in Denver for an officer, completely alone sitting on the side of the road.

The officers were so kind and helpful. There was not much they could do about the driver who left us there, broken on the side of the simmering, congested, and dangerous highway but they did what they could, helping John-Hilton pull the bumper siding off so we could keep driving. We were thankful we were safe and that’s all that really mattered. The whole ordeal had set us back in time so we decided to meet up with my parents who were in Columbia, South Carolina for the night. They were on their way to visit Johnson City, Tennessee where had lived for a little bit of time growing up. We met up with them at an Irish pub for whiskey shots and dinner, before heading off to sleep at a friend’s of Hilton’s who lived nearby.

In the morning, we decided to go explore my family’s property in Winnsboro before heading up into the Appalachian mountains. It was a steamy morning, so we didn’t stay too long, but it is always a good time getting to show our friends around and giving them the history behind our land. Afterwards we headed northwest to Johnson City, Tennessee (FYI the Cumberland Gap is west of the city, making it impossible to be “heading west from the Cumberland Gap to Johnson City,” as the song so wrongly details). Here, we went with my parents to a barbecue dinner with old family friends who gave us several great tips on things to do and see in Acadia National Park up in Maine.

We parked the van at my parents hotel and parking lot camped for the night. I unknowingly sat in an ant pile before climbing into bed. My back started to itch and then burn, and I began apprehensively begging John-Hilton to look at my back. We discovered all the ant bites and started laughing. Sheesh, who would have thought to worry about the wilderness in a parking lot. In the morning, we were able to sneak some hotel breakfast and headed to our first hiking destination of the trip.

I wanted to take John-Hilton to this incredible waterfall I used to hike with my family when I was younger. It is called Laurel Falls and it sits just off the Appalachian Trail. There are two trails you can take to get to the falls; we opted for the shorter 3 mile trail over the 6 mile trail since we needed to drive to Richmond, Virginia later that day. After descending the steep, stone steps down to the cool, fast flowing water we became so excited. This is what we had come on this trip to do, to immerse ourselves in the natural beauty of our country, to get lost in the woods and reconnect with our inner selves. Something John-Hilton and I both readily agree on is that we are not city folk, we love the places that take us away from the hustle and bustle. The ebb and flow of rippling waves and the rushing sounds created by this waterfall were so calming and relaxing, and that’s what we want to mold our lives around; a sense of peaceful movement and stability that cultivates growth in our hearts and souls, and brings life to our surroundings. I am a sucker for a beautifully written verse or poem, and a quote by Bruce Lee really resonated with me during this hike to the falls,

Our journey will be one of storms, of rainbows, of ocean waves, both trickling and crashing, of bends in the river, and curves in the bay; it will be one of endless flowing, cascading us over rocks and sandy shores, guiding us right to where we need to be, nourishing our bodies, minds, and souls every step of the way. Here’s to being like water my friends. Cheers! 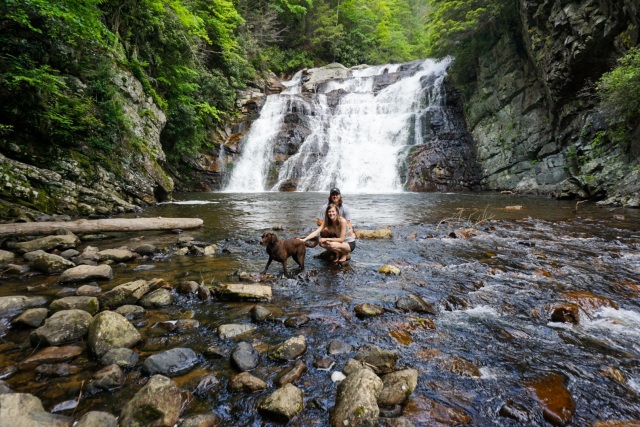 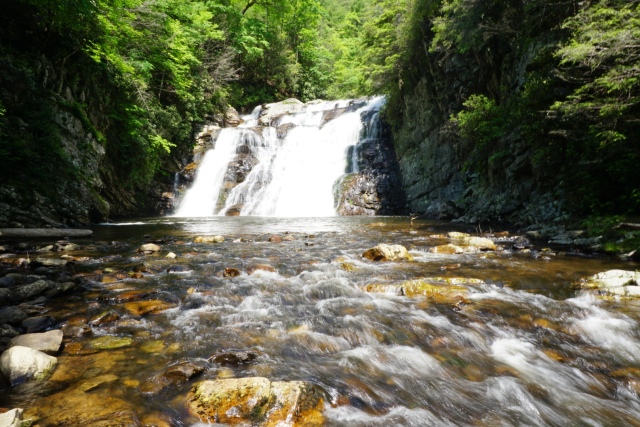 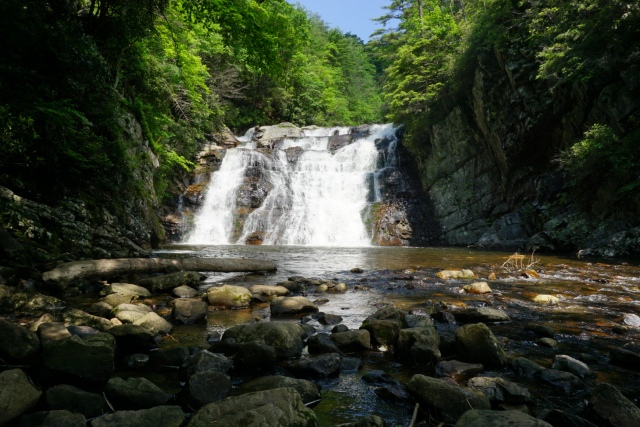 One thought on “A Lesson From a Waterfall”