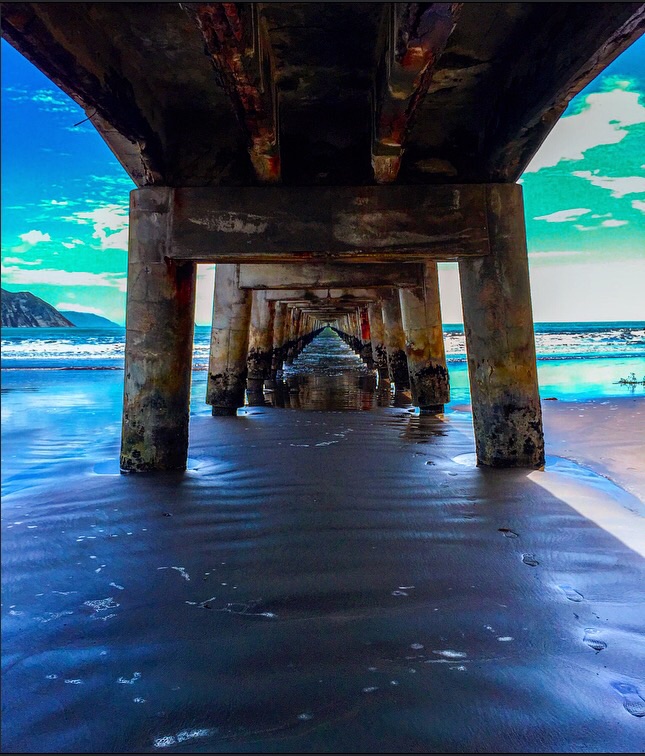 Kendra and I were making our way to Whakatane to take part in a White Island boat tour. I know I previously mentioned I’m not a fan of tours, but this one was a definite exception as it’s a tour of a dangerous, remote volcanic island, only accessible through a charter company. We were traveling up the East Coast via the Pacific Coast Highway and made several pit stops along the way. And no, California is not the only place to have a PCH.

We started our journey on the PCH after finishing up our tractor ride at Cape Kidnappers. We did make a quick stop at Te Mata Peak before getting too far out of the Hawke’s Bay area. Te Mata Peak offers spectacular 360 degree views of the city, coast, and a couple mountain ranges. We watched a couple paragliders take off from the steep edge and relaxed in the shining sun. I snuck in some quick yoga stretches and head stands, and we hit the road again. The rest of the day was pretty uneventful, and we stopped in Gisbourne for the night.

Gisborne is a unique spot because it is the place where you can see the sun rise before anywhere else in the world. Luckily we were staying at a cute Airbnb right on the beach so we didn’t have to go far to catch the sunrise. We were even lucky enough to see it set right from our balcony as well. We awoke at 5:30 and made our way to the patio to catch the sun steadily ascend into the sky. It was a gorgeous morning with orange and pink soaked skies.

After making some breakfast, we got on the road again. Our next stop was the Tolaga Bay Wharf. It is the longest wharf in New Zealand, totaling 660 meters in length. That’s roughly seven and a half football fields! It was such a beautiful day, and walking around in the warm sun along the warf and the coast was a real treat. At one point in a daze, I walked out to some rocks looking for a small cave like opening in the cliffs I had seen from the warf. All of a sudden a massive wave came crashing in, and I had to run back to the safety of the shore to avoid being stuck out in the rising water. 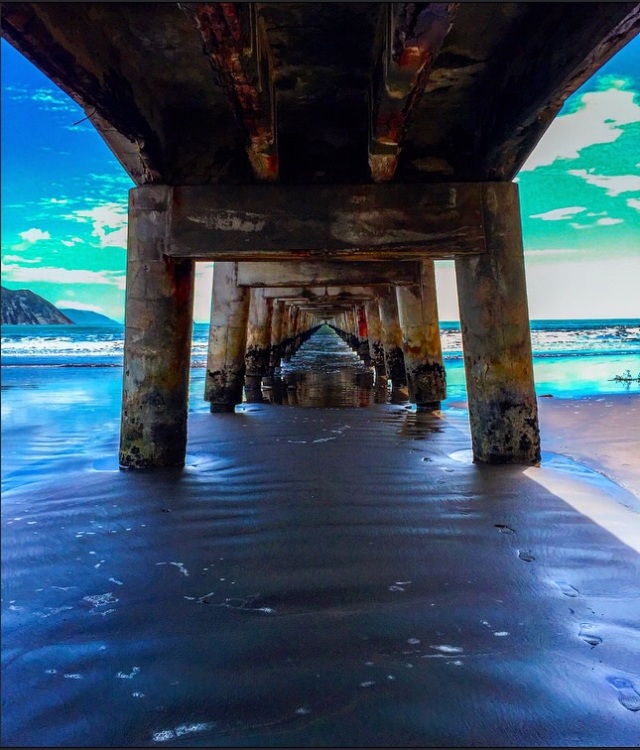 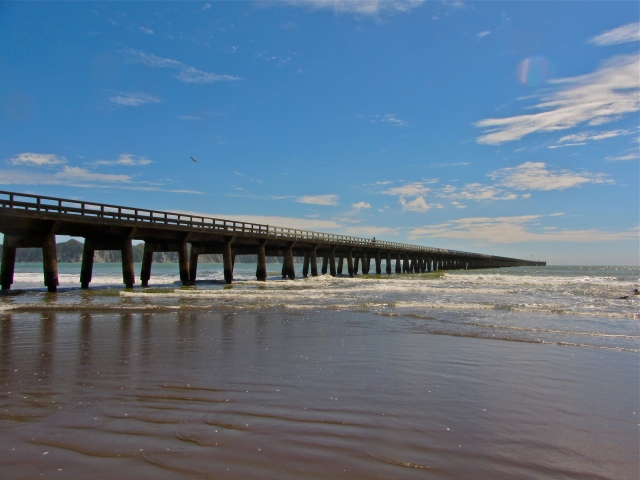 Our next stop was in Tikitiki to see the Maori church called St. Mary’s. This church was built in 1924 to commemorate the fallen Ngāti Porou soldiers during World War I. It sat up on a little hill, surrounded by colorful flowers and trees. The church is unlocked and you may enter free of charge, remembering to be respectful of the sacred space and to turn off the lights when leaving. The Maori architecture, stained glass, and carvings in this building are beautiful. I will talk about the Maori a little more in a minute, but their artwork, mythology, and culture within New Zealand is fascinating. I am ashamed to say I did not do a good job of getting pictures of this place. I have this horrible habit of not being able to stay awake in moving vehicles, so I was incredibly groggy during some of these stops, and not completely with it. A big thanks goes to Kendra for the picture of the pulpit section of the church (and for the last warf picture above). 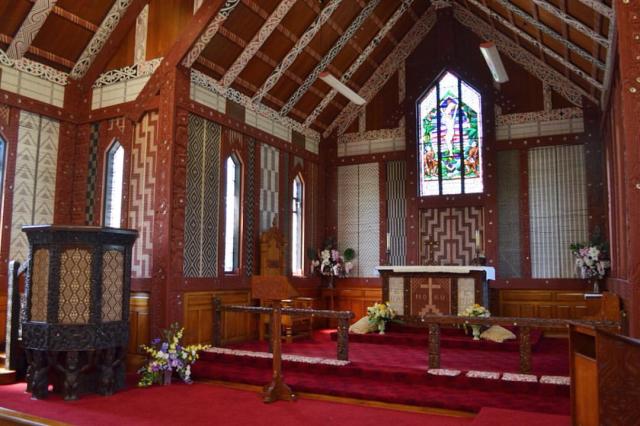 We veered off the PCH again to see the world’s largest and oldest Pohutukawa tree in the township of Te Araroa. New Zealand is incredibly culture oriented. So, this tree has a name, and a story behind it. That’s how pretty much everything in NZ is though; behind every landscape or archaic architectural structure, there is a Maori story of how it came to be. The Maori were settlers from Polynesia who came to NZ around 1280 AD. You can see evidence of their culture all over the island. There are pous (similar to a totem pole) carved in many places as well as churches, and sacred land areas (we came across one while hiking the Tongariro crossing.) The All Blacks even do the Maori “Haka” dance, a war dance, before each rugby game. Any way, this Pohutukawa tree is around 600 years old and its name, Te Waha-o-Rerekohu, means “mouth of Rerekohu.” Rerekohu was an ancestor from the area who would store food near the pohutukawa. 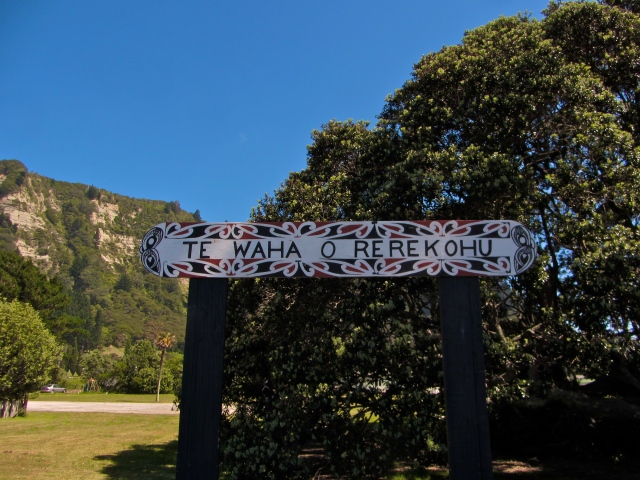 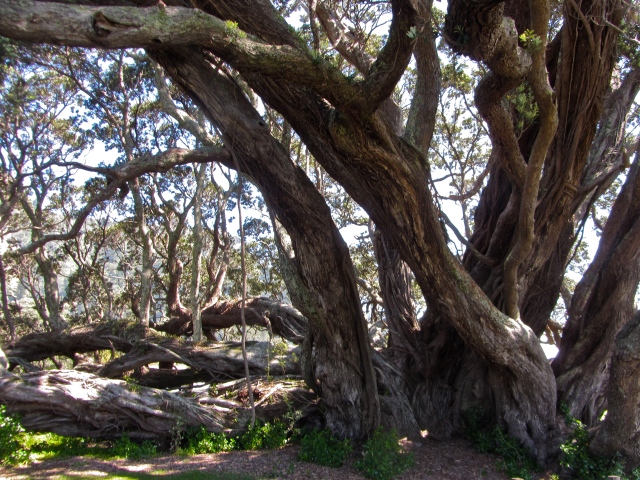 For our last stop on this road trip, we headed down to see the East Cape lighthouse. The road to the lighthouse is 22km long with no outlet, the end being where the lighthouse stands. This also marks the most easterly point of the New Zealand mainland. We made it a pretty decent ways along before we hit construction that closed the road down. I believe there was a washout or something of the sorts that made the road impassable. We were pretty disappointed, turned around, and headed back along this curvy, coastline road. The rest of our travels along the PCH were just as beautiful. The road was winding and narrow, with incredible views of the rugged coast. However, I was excited when we reached our final destination of Whakatane, and could start getting ready for our adventure on White Island.