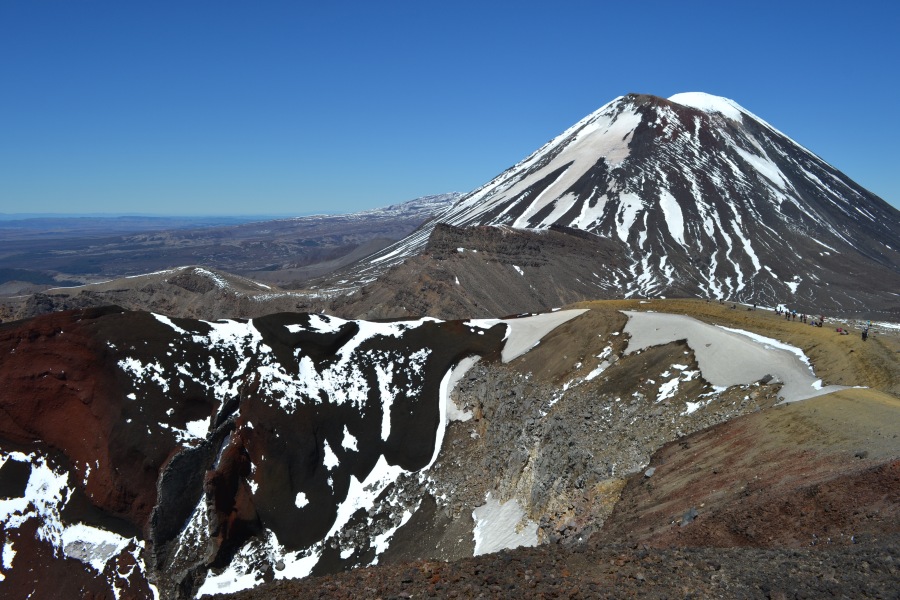 This day is one I will never forget. It started out simply enough, Kendra and I were to catch our shuttle at 6:15 AM to make it to the crossing by 7:15 AM so that we had ample time to get back to the shuttle at the end of the day. We layered up and packed up a hearty lunch with several snacks, mentally preparing for what everyone kept telling us was one of the hardest hikes they had ever gone on. We walked out to meet the shuttle at 6:15 and there it was… anddd there it went. We looked at each other for a split second in sheer panic, breakfast bagels in hand, and started sprinting after our shuttle, screaming at them to stop. After about two blocks, we stopped, completely dumbfounded by what had just happened and decided to walk to the i-site to see what we could do. Well unfortunately the i-site didn’t open for another two hours and no one was answering the phone for the shuttle company. Kendra and I were pretty angry and had just added an extra 2 miles of running to our already lengthy 20 km trek that was ahead of us… if we made it there. We had to make a decision. And that decision was to hitchhike. After several failed attempts, we found a young couple in a camper van filling up at the local gas station. We asked where they were headed and wouldn’t you know! They were headed to the end point of the crossing! All we had to do from there was convince a shuttle to take us to the front, and wouldn’t you believe it! They were taking the same shuttle that had left us! This amazing couple took Kendra and I to the end of the crossing, we secured a spot on our original shuttle after guilting them about leaving us behind, and made it to the start of the crossing, only an hour and a half behind schedule. We couldn’t help but laugh at what had happened and we were so excited to get our hike started.

At the start of the crossing, there were hundreds of people. It was slightly overwhelming. It was a pretty chilly, windy day so I couldn’t imagine what it was like crowd-wise on a nice, warm summer day. However, once we got started the crowd thinned out a bit and we got so hot! The first section of the trek started on  a boardwalk overlooking a field of lava rock. We arrived at the first pit stop, Soda Falls, in about an hour and had to strip down to our base layers. Ahead of us was a steep incline known as the “Devil’s Staircase.” Kendra and I handled it surprisingly well. We took a couple short breaks to drink water and eat a granola bar, but we couldn’t believe that was all the “Devil’s Staircase” had to offer. At one point, we even asked fellow hikers if that was really it or if there was another intense climb we hadn’t arrived at yet.

At the top of the staircase, you had the option of hiking to the summit of Mt.Nguaruhoe (Mt. Doom from Lord of The Rings) or to continue on the alpine crossing. We chose to pass on the summit hike as we were already running behind and it looked like something that might be slightly out of our physical abilities for the day. (Neither of us had done a mountain hike of such length and caliber before, so we wanted to make sure we weren’t dying and rushing at the end of the day.) If I ever return to the North Island of New Zealand, it is definitely something I would like to accomplish. As we continued on the crossing hike, we walked across a nice flat segment in between the two volcanoes, Mt. Doom and Mt. Tongariro. It was spectacular. There was no plant life, just tan colored sediment and snowy leftovers from the winter season. 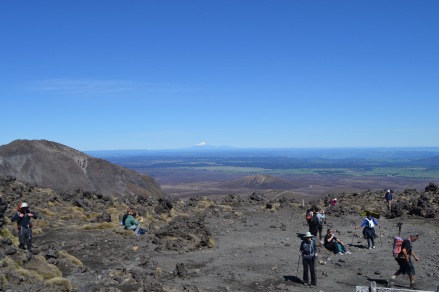 Kendra and I arrived at the next incline, very steep, but not as lengthy as the last. One section offered a metal chain for you to grab on to in order to help you up the icy rocks.  The view from the top of this final climb was more than breathtaking. I can’t even describe the beauty of the volcanoes and the surrounding mountain ranges. To one side of this 360 degree lookout, you had this incredible view of Red Crater. If you scanned over a bit, to where the trail was headed, you saw the Emerald Lakes followed by Blue Lake. Further still, you saw the Tongariro Volcano summit, and completing the full circular view, was Mt. Doom and its respective lake. Pictures cannot portray the beauty of this place. We proceeded to take a few hundred pictures and adventured off the path to get up close and personal with some of the sights. 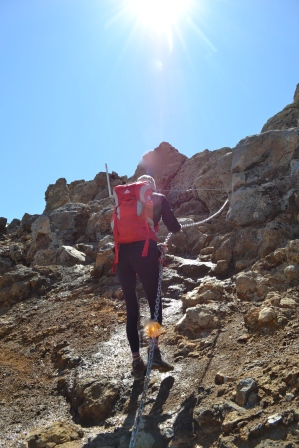 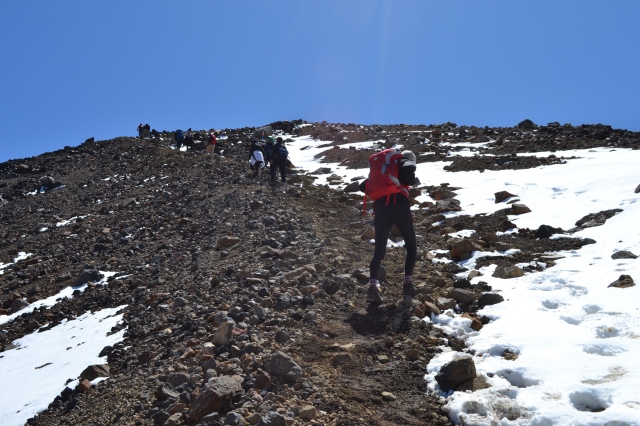 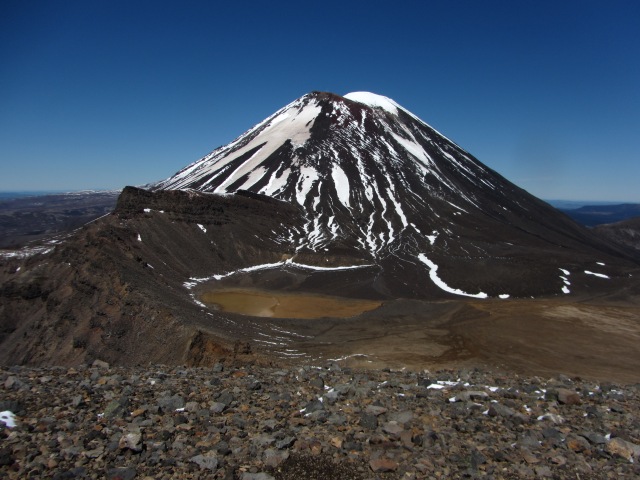 Climbing back down the other side of what we had just climbed up proved to be difficult and hilarious. We sat just off the side of the trail and watched people slip and slide down the trail of volcanic ash. Some falls were easily predictable, and as long as no one got hurt, we let out a few giggles. It was all in good fun as I took a spill myself, quite gracefully I might add, while we were descendingthr steep slope trying to get a better view of the yellow and green sulfur lakes. Around the three lakes, there were pockets of steam billowing out from the ground. Each lake had its own vibrant color. The first one that we came to was the largest, filled with bright green water within its center that was surrounded by a thin yellow ring along the outer rim. The second was the smallest and more of a pastel aquamarine color that reminds me still of an Easter egg. The third lake was my favorite. Its water had a translucent turquoise color towards the center that darkened quite a bit on the edges. It was absolutely beautiful. We decided to eat our lunch here before continuing on across the valley to Blue Lake and beginning our descent down the mountainside. 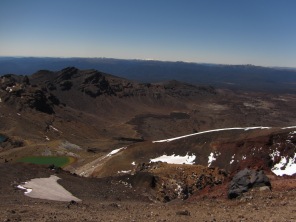 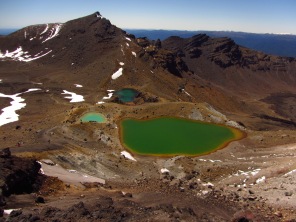 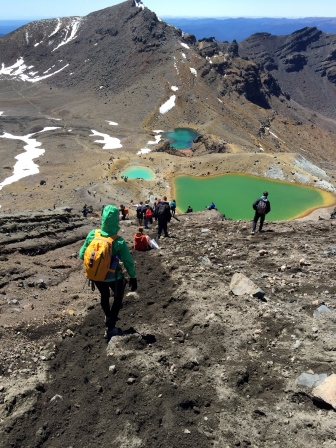 Blue Lake was incredible as well. It sits up alone after you cross the valley between the Red Crater, Emerald Lakes, and Mt. Tongariro. Kendra and I sat here for a bit as well since we had made decent time so far before we decided we had better get going. I didn’t want to leave but the shuttle would be waiting and we had taken enough pictures and mental snapshots that the views would last a lifetime in our memories. 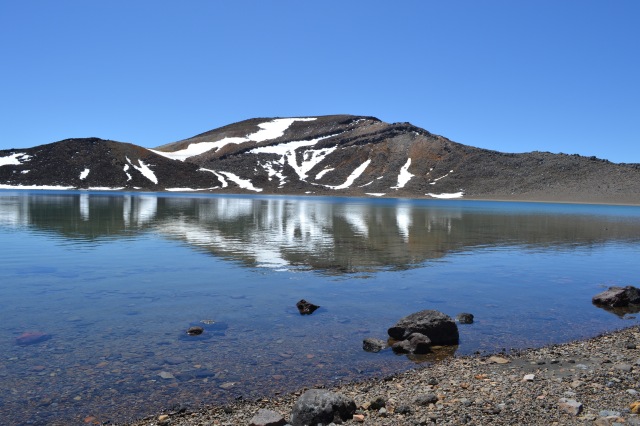 The descent, in my opinion, was the hardest part! My poor toes were constantly smashing into the front of my hiking boots and my knees, which are prone to soreness from IT band problems, began to send me little hints that they were not happy. There were a few more volcanic vents we passed by, including Te Maari Crater which had erupted most recently in 2012. Several signs warned us to keep moving quickly through this volcanic hazard area. After we were done hiking down the open volcano side, we entered a beechwood forest with more warnings to keep moving as we were in a lahar (lava flow) region. At this point we were more than ready to reach the end and when we finally saw the parking lot with all the shuttles we were relieved to be able to sit down and take off our packs. It had been quite a memorable day and we laughed as we thought back to our panic nearly 11 hours earlier when we thought we wouldn’t even make it to the start of our hike. 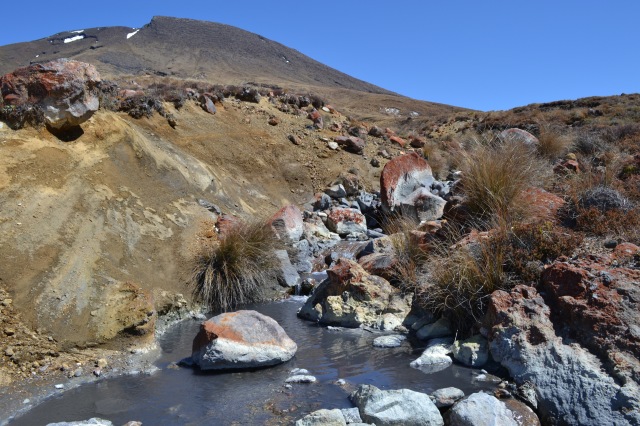